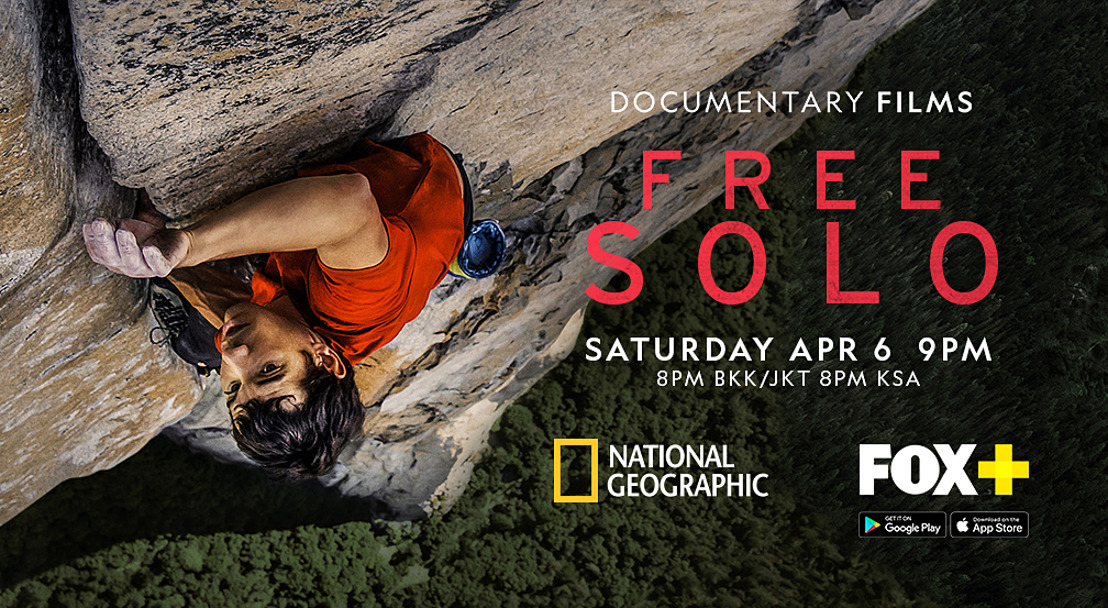 HONG KONG, MARCH 22, 2019 – Winning the Oscar for “Best Documentary Feature” at the Academy Awards and widely hailed as one of the most successful documentaries of all time, the National Geographic documentary film Free Solo is making its Asia debut. Tune in to the Asia premiere of this stunning cinematic masterpiece on Saturday, April 6, 2019 at 9.00 PM (Hong Kong time) on National Geographic Asia and video-streaming service FOX+.[1]

Free Solo keeps audiences at the edge of their seats, waiting to see what will happen next in the thrilling true story of professional rock climber Alex Honnold as he makes his free solo climb up El Capitan – a 3,000-foot granite wall in in Yosemite National Park. Scaling the world’s most famous vertical rock formation with no ropes and no safety equipment, a feat never before achieved, Honnold will push the limits of human endurance physically and mentally.

The film is an intimate and unflinching portrait of Honnold, following his preparation for the climb and the challenges he encounters, including what happens when the climber begins to fall in love – threatening his focus and giving way to injuries and setbacks. These deeply human moments as well as Honnold’s death-defying climb, are captured with exquisite artistry and masterful, vertigo-inducing camerawork, in this breathtaking story showcasing the triumph of the human spirit.

Throughout its theatrical run, Free Solo set several US box office records and was praised by entertainment critics across the globe as “one of the most arresting documentaries of the year,” “extraordinary,” “amazing” and “visually staggering.” Free Solo won the highly coveted Oscar for “Best Documentary Feature” at the recent Academy Awards and the BAFTA for “Best Documentary” at the British Academy of Film and Television Arts Awards. The film’s accolades also include three US Critics Choice awards, three Cinema Eye awards and an American Cinema Editors (ACE) award for Best Documentary, among several other industry recognitions.

Free Solo comes from award-winning documentary filmmaker Elizabeth Chai Vasarhelyi and world-renowned photographer and mountaineer Jimmy Chin, who previously collaborated on the Oscar-shortlisted documentary film Meru. “When we were making this film, we could not have imagined the response we have received,” said directors Vasarhelyi and Chin. “While most of us would not dream of free-soloing 3,000 feet, Alex’s story of courage, dedication and determination is very relatable. We are grateful to be working with National Geographic and Fox Home Entertainment, and thrilled that Alex’s journey will continue to inspire others to dare to dream.”

“In addition to being an inspiring message of perseverance and determination, Free Solo is also a stunning cinematic achievement that showcases the beauty and grandeur of our national parks,” said Carolyn Bernstein, EVP of global scripted content and documentary films for National Geographic. “The film serves as a powerful reminder that it is incumbent upon all of us to protect the natural world around us.”

Free Solo first debuted at the Telluride Film Festival, went on to screen at the Toronto International Film Festival to rave reviews and has screened at more than 30 film festivals around the world, including IDFA, Adelaide, Mill Valley Film Festival, DOC NYC and the Savannah Film Festival.

Tune in to the Asia premiere of Free Solo on Saturday, April 6, 2019 at 9.00 PM (Hong Kong time) on National Geographic Asia and video-streaming service FOX+,[2] to witness the breathtaking story!