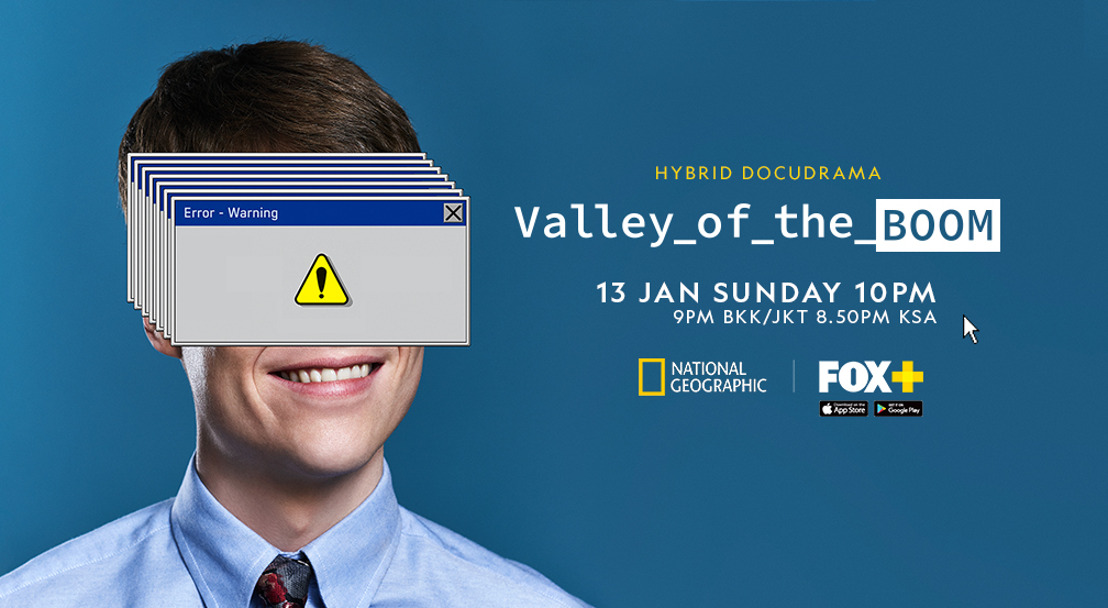 HONG KONG, JANUARY 7, 2019 – Silicon Valley spawned some of the world’s most influential people and recognizable brands during the 1990s and attracted geniuses and charlatans alike. It is also where the new phenomenon of the overnight tech millionaire was born. Using a blend of narrative devices and interviews with the real subjects and experts woven into scripted drama, showrunner, creator, director and executive producer Matthew Carnahan (“House of Lies”) charts the meteoric rise and cataclysmic burst of the dot-com bubble.

From STX Entertainment, Valley of the Boom is also executive produced by Arianna Huffington and is set to premiere on National Geographic in Hong Kong and South East Asia on Sunday, January 13, 2019 at 10.00 PM (HKT) and on video-streaming service FOX+. The new six-part limited series features an unconventional hybrid of scripted storytelling and documentary interviews with the key players whose stories are dramatized in the show.

In the series, Carnahan follows the turbulent ride of three different companies whose founders were trying to change the world using the new technology of the internet. Before Google, Netscape pioneered the first commercial web browser and launched the “browser wars” with Microsoft. Before Facebook, theglobe.com was a rapidly expanding social networking site built by dreamers on a university campus. And before YouTube, a con artist on the run from the FBI reinvented himself in Silicon Valley to start a streaming video company called Pixelon, resulting in an entrepreneurial rise and fall almost too insane to be believed.

Valley of the Boom stars an ensemble cast led by two-time Emmy award-winning actor Bradley Whitford (“Get Out,” “The Post,” “The West Wing”), Steve Zahn (“War of the Planet of the Apes,” “Dallas Buyers Club”) and Lamorne Morris (“Game Night,” “New Girl”).

The documentary-style interviews that support the drama include experts from the era — such as Mark Cuban, Dan Goodin and Huffington — as well as prominent tech figures from the companies featured in the series — such as former President and CEO of Netscape Communications Corporation James Barksdale, Netscape founder Jim Clark and co-founders of theglobe.com Stephan Paternot and Todd Krizelman.

“Our society is internet-dependent but most of us are not familiar with many of the visionaries who brought the web into existence and battled for its soul. In Valley of the Boom, I focused on telling the humorous, messy and real stories of these inventors, investors and con men,” said Carnahan. “The goal is that the way in which the story is told is as disruptive as these figures themselves.”

Each storyline in the series features the hallmarks of an epic saga — wealth, greed, manipulation and con artists. Valley of the Boom is stranger than fiction and it is all (mostly) true!

Jim Clark and Marc Andreessen founded Netscape in 1994 with the goal of being the No. 1 internet browser in the world. After an incredibly lucrative initial public offering it seemed like they were right on track. The established team at Microsoft, however, was not willing to accept inferiority to this new trailblazer. In Valley of the Boom, Carnahan exposes Netscape’s struggle in this battle known as the “browser wars” through the eyes of Bradley Whitford as James Barksdale, John Murphy as Clark and John Karna as Andreessen. Carnahan uncovers the method of the masterminds of Netscape’s madness, offering an up-close and personal account of the company’s historic IPO and what followed.

While the browser wars raged on, determined students Todd Krizelman, played by Oliver Cooper, and Stephan Paternot, played by Dakota Shapiro, were busy founding theglobe.com at Cornell University. Krizelman and Paternot struggled to fund their venture initially but they were ultimately able to take their social networking site from their dorm rooms to one of the largest tech IPOs in history. Theglobe.com set a record for the highest first-day price gain for a new stock offering in 1998, changing the co-founders lives forever. In Valley of the Boom we hear their story directly from the source, as Carnahan includes interviews with the two.

While Krizelman and Paternot were prepping for their IPO, con man Michael Fenne, played by Steve Zahn, moved across the country, reinvented himself and founded Pixelon, a multimillion-dollar streaming video tech company. Fenne was on the run from the law and his entire company’s existence was built on deception. He conned investors out of hundreds of thousands of dollars while promising them high-quality streaming on the internet that never actually materialized as advertised. iBash was Fenne’s extravagant, multimillion-dollar launch party that resulted in an even more extravagant failure. The series uncovers all of Fenne’s secrets to show just how quickly Pixelon crashed into bankruptcy.

Valley of the Boom is produced by STX Entertainment’s TV studio, STXtv, for National Geographic, with creator, showrunner, director and executive producer Carnahan (Showtime’s “House of Lies”) at the helm and executive producer Huffington (founder of The Huffington Post, founder and CEO of Thrive Global and the author of 15 books, including “Thrive” and “The Sleep Revolution”).