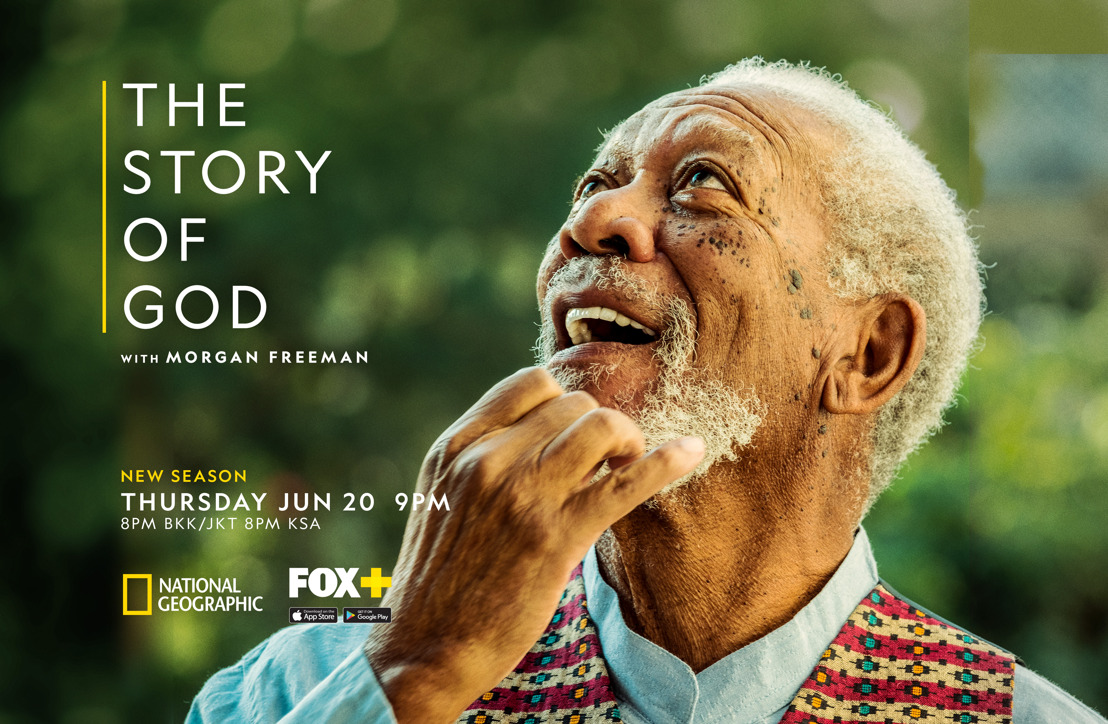 HONG KONG, JUNE 4, 2019 – Who is the devil? Where do visions come from? Can performing rituals bring us closer to God? How do we fight back against sin? National Geographic and Revelations Entertainment explore the ways humanity has sought and received faith throughout our history in season three of the Emmy-nominated hit series The Story of God with Morgan Freeman, premiering on National Geographic and video-streaming service FOX+, on June 20, 2019 at 9.00 PM (Hong Kong time) in Hong Kong and Southeast Asia. Freeman again travels to the far reaches of the globe to visit some of humanity’s most sacred sites in a quest that explores the different ways that spirituality and transformation have established a connection with the divine, and how our search for God’s presence has informed our shared history, culture, beliefs and even individual behaviour.

The first two seasons of The Story of God with Morgan Freeman are available to stream on video streaming service, FOX+.

The Story of God with Morgan Freeman takes viewers on an interfaith journey around the globe, travelling to 30 different cities of historical and anthropological importance, including Jerusalem, Kathmandu, Jericho, Rome, Bethlehem, Paris, Prague, Hanoi, Toronto and Lourdes. The series’ filmmakers logged more than 50,000 total miles, which is the equivalent of circumnavigating the globe twice, and met with 13 religious experts, eight priests, three druids, three shamans, one imam, one rabbi, one former executioner, one nun, two living goddesses and hundreds of monks. The series takes an expansive look at religions celebrated around the world, exploring practices that date back thousands of years before the Common Era, as well as new denominations founded less than 100 years ago, and interviewing believers of many faiths including Christians, Jews, pagans, druids, Muslims, Hindus, Jains, animists, Buddhists and agnostics.

Each of the six episodes in the new season is centered around a different question about our relationship to the divine:

To explore these topics and more, the series travels to some of the world’s most sacred sites, including the Chapel at Lourdes, where thousands of believers claim to have been cured by the waters of its spring; the Church of the Nativity in Bethlehem, where the faithful believe Jesus was born; the ancient city of Pergamon in Turkey, dubbed “Satan’s Throne”; the spectacularly preserved Villa of Mysteries in Pompeii, Italy; the Gheralta mountains of Ethiopia, where Coptic Christian priests scale the side of a mountain to reach an ancient cave; the temple palace of the Kumari in Nepal; and Tel Megiddo, an archaeological site containing one of the oldest known references to Jesus Christ as God.

Season 3 of The Story of God with Morgan Freeman will feature the following:

The Story of God with Morgan Freeman: Search for the Devil

Who is the devil? A god? A fallen angel? Or a natural urge lurking inside us all? Morgan Freeman’s quest to discover how humankind’s views of evil incarnate affect our world takes him from the Holy Land to Rome to a temple in Vietnam. In his travels, he learns that whether the devil is seen as an antagonist or a natural complement to the forces of good, there is a role for the dark side in almost every faith.

The Story of God with Morgan Freeman: Gods Among Us

Are there people walking among us who truly embody the divine? Many of us were taught that God is in heaven, yet we believe that it’s possible for people on Earth to have a direct connection to God. Christians think of Jesus as the epitome of the divine made human, but people of all faiths have sought God in charismatic figures. Morgan Freeman journeys around the world to explore the mysteries of these mortals, including a rare meeting with the famed Kumari of Nepal, a prepubescent living goddess.

The Story of God with Morgan Freeman: Visions of God

Stories about visions of God are found in most religions, but where do visions come from? What do they have in common? Morgan Freeman sets out to explore the mysteries behind these visions, and his travels take him to Lourdes, France, where believers claim to have been cured of physical and spiritual ills by the water flowing from its spring. He also meets with a member of the Anishinaabe Tribe in Canada to learn about the transformative power of a vision quest.

The Story of God with Morgan Freeman: Deadly Sins

How do we grapple with the reality that we are all susceptible to sin? What Christians call “sin,” other religions describe with similar concepts, such as “karma” in Buddhism and Hinduism, or “guo” in Taoism. Morgan Freeman travels around the world to explore how different religions have developed ways to fight back against sin. He visits a local Hindu community in the United Kingdom to celebrate Diwali, and journeys to Vietnam, where he meets the commandant of the Hanoi Hilton, the notorious prison where the North Vietnamese kept prisoners during the war.

The Story of God with Morgan Freeman: Divine Secrets

Some faiths keep their entire religious communities hidden for fear of persecution. Other faiths have secret practices that only special initiates are allowed to participate in. Morgan sets out on a journey to understand why secrecy and religion are so often intertwined, and if the mystery of ritual can bring people closer to the mystery of the divine. Along the way, he travels to the spectacularly preserved Villa of Mysteries in Pompeii to see frescoes depicting the secret cult of Dionysus, which is believed to have performed rituals of animal and human sacrifice.

The Story of God with Morgan Freeman: Holy Laws

For many believers, the Ten Commandments are a moral guide and the foundation of Judeo-Christian and Islamic society. Around the world, other societies and religions also have divine prohibitions and prescriptions that the faithful must follow. Morgan Freeman travels to Jerusalem to meet with an archaeologist and examine a segment of the Dead Sea Scrolls, and crosses the globe to Nepal, where he explores the commandments of Jainism — the five great vows or Maha-vastras.